InstallAware Give Away Results

I'd like to thank Sinan at InstallAware for his generous offer of a InstallAware Developer license to readers of this blog. The offer started on Tuesday and went until Friday. During that period this blog had 1379 page loads from 859 unique visitors. Sinan Karaca reports to me that they gave away 56 free licenses worth $83,944.00.

In other news, the Federal Trace Commission has adopted new guidelines that requires blogs to disclose endorsement compensation. As such I've posted an official disclosure stating the position of this blog. In summary, this blog has never and will never accept any form of compensation. We will however pass on swag opportunities to our readers when given the chance.
Posted by Christopher Painter at 8:49 PM 2 comments:

Update: Per Sinan, this offer has expired.

In fact, anybody reading this blog and wanting to check out just how revolutionary InstallAware is, send sales at installaware.com an email with the subject "Painter License" and we'll send out a complimentary Developer license your way. Till this Friday only :)

Well, who am I to pass up an opportunity for my readers to get a free copy of InstallAware? So if you feel like trying something new to fire off your email request.

Note: InstallAware requires a non-anonymous email address ( no gmail, yahoo, msn ) and DeploymentEngineering.com is not affialated with InstallAware and has no role or responsibility in this give away promotion.
Posted by Christopher Painter at 5:22 PM 5 comments:

I was reading a news release where InstallAware boasted:

"InstallAware setups power the installation of the Activation Assistant for Microsoft Office 2007, pre-installed by OEMs on millions of laptops around the world," says Sinan Karaca, founder of InstallAware Software Corporation.

I decided to google "Activation Assistant for Microsoft Office 2007" and the results indicate that millions of people around the world can't get this software removed from their box. Way to go Microsoft and InstallAware! I don't have access to the installer, but from the symptoms I'm reading, it sounds like somebody forgot to listen to sage advice of always including "or Installed" in their LaunchConditions.

Anyways, the install issue caught the attention of PCWorld. Here's a snippet of the write up that is really worth reading.

In fact, the Activation Assistant is so troublesome that when I suggested that we just reinstall the dang thing, he flat-out refused. He said that would likely cause more problems--and I don't argue with escalation managers...

So maybe InstallAware should dig a little deeper when trying to reference "successful" projects.
Posted by Christopher Painter at 9:07 PM 5 comments: 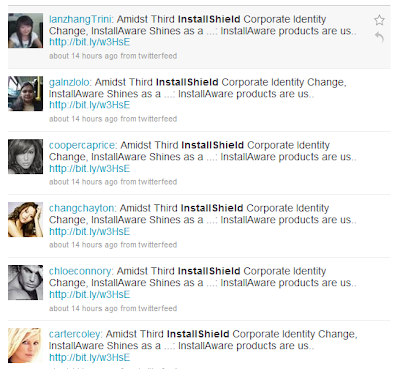 It's an old adage that "sex sells" in marketing. But surely there is no space less sexy then setup development tools, right?

Well, it seems InstallAware has sunken to new lows by engaging with marketing partners to spam the twittersphere using what I can only assume are astroturfing fake profiles. Their PR angle is that they a shining example of stability in light of InstallShields multiple name changes.

Hmmm. Based on the comments, emails and threads that I've been shown InstallAware could actually use a good corporate identity change right now. The level of customer disservice (including rude attacks against customers ) that I've witnessed has been horrific.
Posted by Christopher Painter at 7:17 PM 4 comments:

Enough said?
Posted by Christopher Painter at 6:13 PM No comments:

I read the news today that Acresso is changing it's name to Flexera.

As if the makers of InstallShield hadn't already done enough damage to their brand, let's just go change names yet again!


BTW, Flexera is already taken by a company in the alternative energy market. Anyone want to take a guess which one of these companies actually stands a chance of being in a high growth market for the next ten years?
Posted by Christopher Painter at 12:35 PM 6 comments: