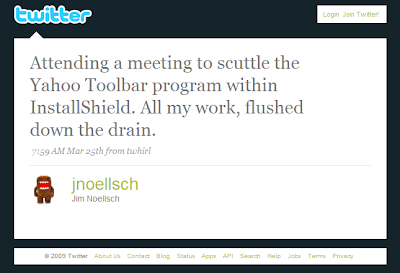 I don't know the whole back story, and I'm sorry Jim feels that his work is going down the drain, but I only have one thing to say to this:

Not a big deal, right?

When installing SQL 2005 SP3 the setup just blows chunks and reboots the computer via blue screen of death!

Worse, the machine goes into an infinite reboot because the installation is an incomplete state and everytime the SQL services try to start the machine BSODS again.

You can boot safe mode and disable the services and then reboot again. But if you attempt to uninstall SQL server you get an error message saying it can't be accomplished.

Wow, thank you Microsoft, you've outdone yourself yet again.

So in digging into this problem it seems that the SQL team is punting to the Windows team. They are saying that they manifested PE files for Vista/2008 in SP3 and that due to a bug in Windows SXS on SP2 ( hotfix available for SP2 or otherwise update to SP3 ) that there is nothing the SQL team can due to solve this.

Um, they could at least put an AppSearch/LaunchCondition into their install so that my machine doesn't turn into a burning pile of dung!

Anyways here's my official warning. Avoid SP3 like the plague and if you must go there, make sure you provide your own prereq check for SP3 or SxS hotfix level in and as always make sure you integration test your installs on the lowest platform configuration possible. I'd hate for some ISV to test on SP3, never see this problem and then ship a product that embeds SQL to a customer. I'd hate even more to have to be taking that BSOD support call.
Posted by Christopher Painter at 8:24 AM 10 comments:

Records entered into the ProgId or Registry tables in the merge module source project do not get created in the output merge module file (.msm).

Acresso support has duplicated this behavior and I am currently working with them to find a work around (my incident number is SIOA-000143195).

I suspect (but have not confirmed) that this may also occur for any records added to the Class or TypeLib tables in a merge module source project file. There may also be others.
Posted by Colby Ringeisen at 11:14 AM 1 comment: