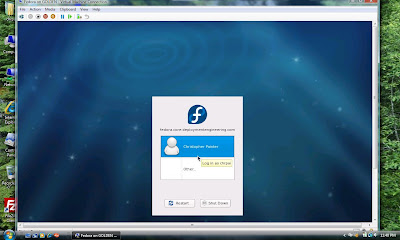 I don't talk about this much, but I wasn't always a Windows GUI guy. In fact I spent many years programming Commodore 64's and Apple II's. My first shell was CPM on a Commodore 128 and of course I spent many years on Amigas back in my FidoNet BBS days. I used to be raving nut case when expressing my hatred for Bill Gates and Microsoft. Of course that was the proper thing for any self respecting Amiga fan-boy back in those days. Let's face it, MS-DOS/Windows 3.1 really did suck compared AmigaDOS/WorkBench. Back then I had a GVP GeForce040-33 board and I ran MSDOS/Windows via PC-Task and had an Emplant board for MacOS so I was no stranger to emulation/virtualization.

Then one day I realized it was time to get out of the Marine Corps and go pro. I built my own 486DX-120 and loaded Slackware on it. Over the following few years I actually spent quite a bit of time on various Linux and Unix OS's ( Slackware, Mandrake, Redhat, DGUX, HPUX, Solaris ) doing back end ANSI C programming and shell scripting for various Department of Defense Client/Server systems. It's amazing how many vi commands I still remember. But for the last few years I've really gravitated away from that world and into a GUI world of NT and .NET. I still remember all the old stuff, but for the life of me I can't imaging why anyone would actually prefer to write code with such primitive tools.

Lately I've been playing with Hyper-V a lot and I thought it was really cool that not only could it run Windows but it can just as easily run Linux.

So I fired up a torrent to pull down the latest Fedora 9 and decided to install it. I haven't really done much with it yet but I've got to admit, it has a wonderful blue motif logon screen.
Posted by Christopher Painter at 11:42 PM

I had a spare box laying around I tried to get Hyper-V running on, but I don't think it particularly liked the Dell BIOS. I have a Core 2 Duo (E6750), Q35 chipset, and all the bells and whistles Hyper-V requires (DEP, VMM); alas, it just wasn't meant to be.

It's a desktop machine (Optiplex 755), but Server 2008 Enterprise x64 installed okay and all the drivers looked good. I'll have to get work to get me a real server that I can play around with it on.

Reading around, it looks like it should work on your Dell. I had to update the bios and tweak a couple settings on my HP server to get it to work.