I came across this post on Monster the other day:

If you are a WINDOWS INSTALLATION ENGINEER that has experience installing windows pre-Installshield (i.e. the old fashioned way!) - think API's, DLL's, and registry setting - this is a great opportunity for you!!

Our client is seeking a smart, experienced Windows Engineer with an ability to work in the dynamic environment of an emerging growth company. You will be tasked with attacking new problems and be presented daily with development challenges that will require a high degree of versatility, mental flexibility, and innovation to solve.

This would make sense if the position if for a setup tools developer rather then setup developer, but the posting seems to clearly indicate that it's the former rather then the later.

Sure, from my script days of the 90's I probably remember how to do all of this stuff but what is the value in loosing every foundation class library available? What is the value for shunning the declarative approach of Windows Installer and doing a roll your own EVERYTHING imperative approach?

I'm lost on this one.

But maybe it really is for a tools position in the open source space and that something new and different will emerge.

BTW, I'm reminded of an embarrasing moment. About 6.5 years ago I was busy doing a build when the phone rang. It was a Senior Director of Technology for Continental Airlines calling me for a phone interview. We chatted for a minute and then he asked me how to replace a locked file on Windows.

My mind drew a blank. Sure, I knew MoveFileEx and PendingFileRename operations but I just couldn't think it at that moment. So instead I gave some lame explanation of InstallShield having a setting for locked files and that it was a black box / white box kind of thing and that if it was to fail I'd spend time profiling it to identify the cause.

The moment I hung up I thought, damn it, why didn't you talk about the Win32 APIs behind the scene? Ughh!

I ended up getting the job.

A couple years later I asked him why he hired me when I couldn't answer such a simple question and he said:

"Because you actually WANTED to do installs."

I think that says enough about our space. It was true then and it's true now, IMO. 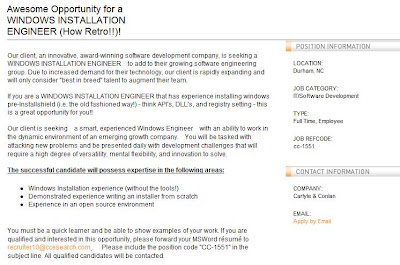 Posted by Christopher Painter at 6:38 AM