I was reading a blog from Windows Installer Expert Stefan Krueger talking about a new setup tool from Microsoft:

At 0:31:15 Tyler introduces the Client Profile Configuration Designer which has just been made available as beta. It's essentially a tool that can chain multiple packages such as the .NET Framework and other prerequisites, as well as ClickOnce packages, MSI based setups or even scripts. It provides a seamless and ustomizable user interface with one progress bar across all the packages, and can either defer reboots requests until the end, or handle reboots between packages gracefully. Optionally it can also create a combined uninstall experience instead of separate entries in the Add/Remove Programs control panel. The Client Profile Configuration Designer can be downloaded from windowsclient.net/wpf/ in the Deployment section.

So I downloaded the program, double clicked the EXE and the install just flashed on by. Oh great, I thought, another one of those WiX based UI-less installs that I've complained about for years. This is sort of odd considering this is supposed to be a fancy WPF chainer.

This left a very unfavorable taste in my mouth as I hate it when an install doesn't announce itself and ask me if it's ok to proceed.

But the real joy was to be had when I tried to run the actual application: 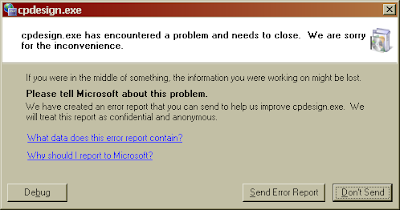 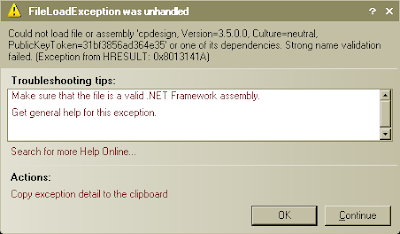 I then started troubleshooting and found all sorts of interesting things. For example, despite touting itself as a WPF based chainer, the package installs itself Per-User and doesn't cache it's package source. It also *SEEMS* to be using the IExpress bootstrapper. Odd Again.

So while I'd like to give this new tool a spin, it seems Acresso's lead in this space remains completely unchallenged. After all, when is Burn going to be done, 2012?
Posted by Christopher Painter at 2:37 PM

I'm having similar problems. Thanks for blogging!

Any news or progress on this? I'm wondering where to go next. I would use ClickOnce but unless you're willing to manually build your distribution files with Mage etc, it doesn't support obfuscation. I would use InstallAware but it doesn't currently support inclusion of the XNA redistributable (which I need), and I don't want to have to figure out writing .rtm and .mia files to add this (although I understand I could). I would use WiX project, but all the versions I have tried crash on the opening page of ClickThrough. I'm trying to not have to manually do everything but every solution I have looked at either crashes or is a ball-ache (technical term).

It has been updated and now it works for me.