I was reading an interesting article from Ed Burnette at ZDNet:

Google announced a new web browser today called Chrome. Analysts who wonder if this spells “doom” for Firefox, or if it’s an “IE killer” are missing the point. Like Gears, Chrome is Google’s latest attempt to lead by example, and push the envelope of the web experience.

The article includes this comic strip panel from Google: 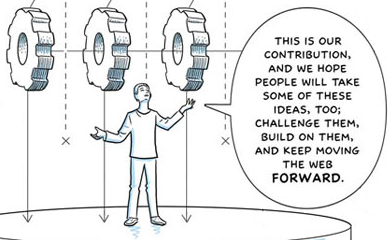 Now I have such a one track mind sometimes that I couldn't help think about WiX and other setup tools vendors. My observations are that while WiX is open sourced, Rob Mensching tends to get very irritated companies other then Microsoft take his code and turn it into a revenue generating product. Case in point being is his comments aimed at InstallAware when WiXAware was first released. I also happen to know another well known tools vendor is very hesitant to include WiX technology in their product. I also believe that this is not an engineering reason rather a fear of opening a can of worms.

The truth is there are some things in WiX that are very good and it would be really interesting if the Google model could be followed. We'd probably all end up with better tools.
Posted by Christopher Painter at 2:21 PM